The first idea was using three MIDI keyboards in one case, connected through MIDI merger. But when I had started to dig into it, I’ve found that 4 channel MIDI mergers are not cheap, and there was a new idea to use Arduino board to build my own MIDI merger.

After a while, by progressing with Atmel Studio and AVR capabilities I have grown to custom boards and done prototyping with Arduino Mega and Arduino mini.

So, here is the block diagram of what I have now: 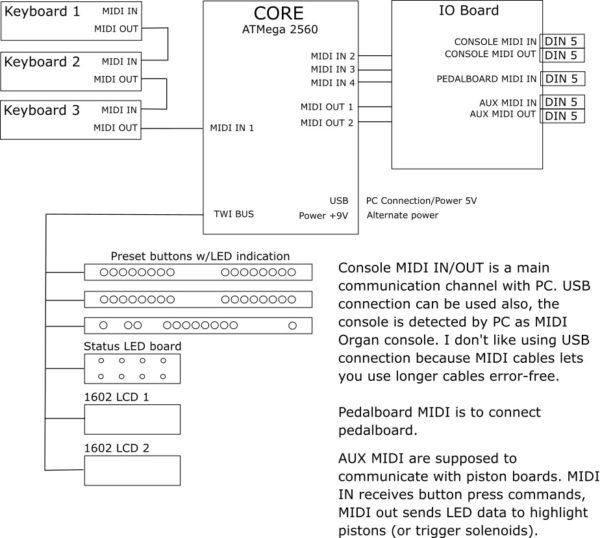 Keyboards are velocity-sensitive, despite the fact that it is not applicable in Hauptwerk: the console can be used with other software like Kontakt, where you can set different instruments to manuals and have a full scale of velocities.

The console CORE receives MIDI signals with channel numbers 0, 1, 2 etc… In settings mode there is an option to leave these channels as is, or increase it once again +1, to use channel 0 for pedalboard and channels 1-127 to your 127 manuals.

The core is a (Arduino Mega actually):

There is three options to power all this garbage:
When using MIDI IN/OUT: +9V power supply(1) or any USB 5V phone charger with USB A to USB B power cord(2).
When using MIDI over USB – direct USB power from PC(3).

While power consumption is still low for the whole setup, I do not recommend using PC to power the console and using MIDI over USB at the same time, because it is very annoying to search for good USB cords if you need it more than 3m long.

Preset buttons communicate with CORE by TWI. CORE translates it to NRPN messages to control Hauptwerk. Selected preset is indicated by button backlight if applicable, thanks to the Hauptwerk back-messaging system.

1602 LCD are used to display the current and next selected preset, combination and organ name, and other stuff. Used also in settings mode, but there are not much settings yet. 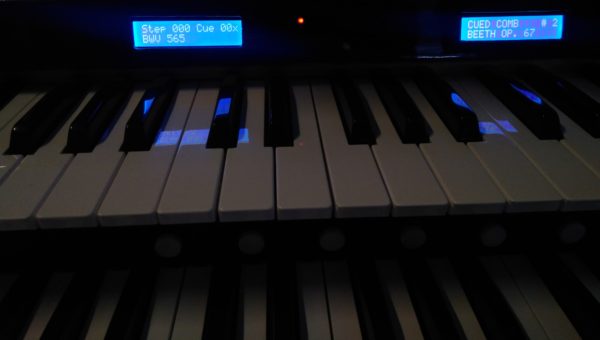 IO board with MIDI DIN5 connections 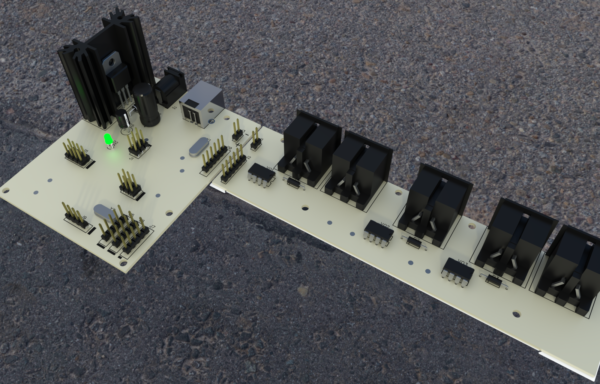